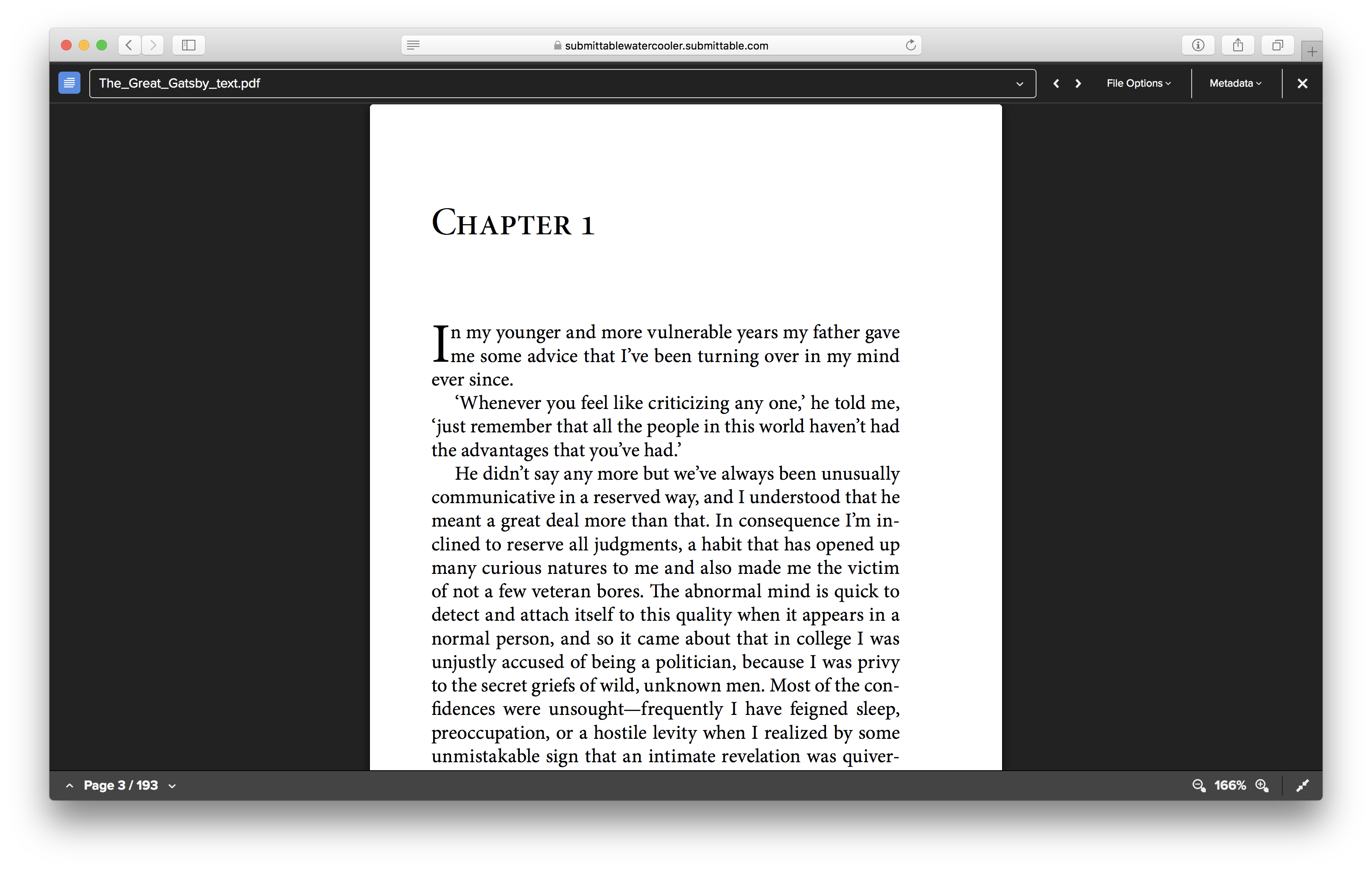 Submittable provides online tools to manage submissions and applications. A core part of this product involves reviewing various uploaded files to judge any given submission. Our previous file viewer implementation and interface depended on a Box library that Box would discontinue. This external deadline created an opportunity to revisit the UX for reviewing any kind of file Submittable accepts. The previous file viewer had discordant interfaces for viewing text-based files, images, audio, and video. It was responsible for over 50 distinct file types. We defined success as a consistent interface that was no longer dependent on Box.

Organizations ranged from literary journals with a single editor to large teams with multi-stage review processes.

No personas existed; due to the strict engineering deadline, we did not invest time to create them.

As Senior UX Designer, in August 2017, I joined a team consisting of:

From August-October, I ran deliverables by the visual designer and the PM. Afterwards, I largely collaborated with engineering on the implementation.

1. Understand and Evolve the Spec

The product manager started a spec with what functionality and UI affordances the new file viewer had to support. She also collected a few UI examples of other viewers in an InVision board. I started capturing screenshots of how our current viewer handled various file types. I noted inconsistencies, got clarifications about historical decisions, and captured cases not covered in the spec. For example, how do we handle files a submitter can upload but our file converter cannot render, such as executables? 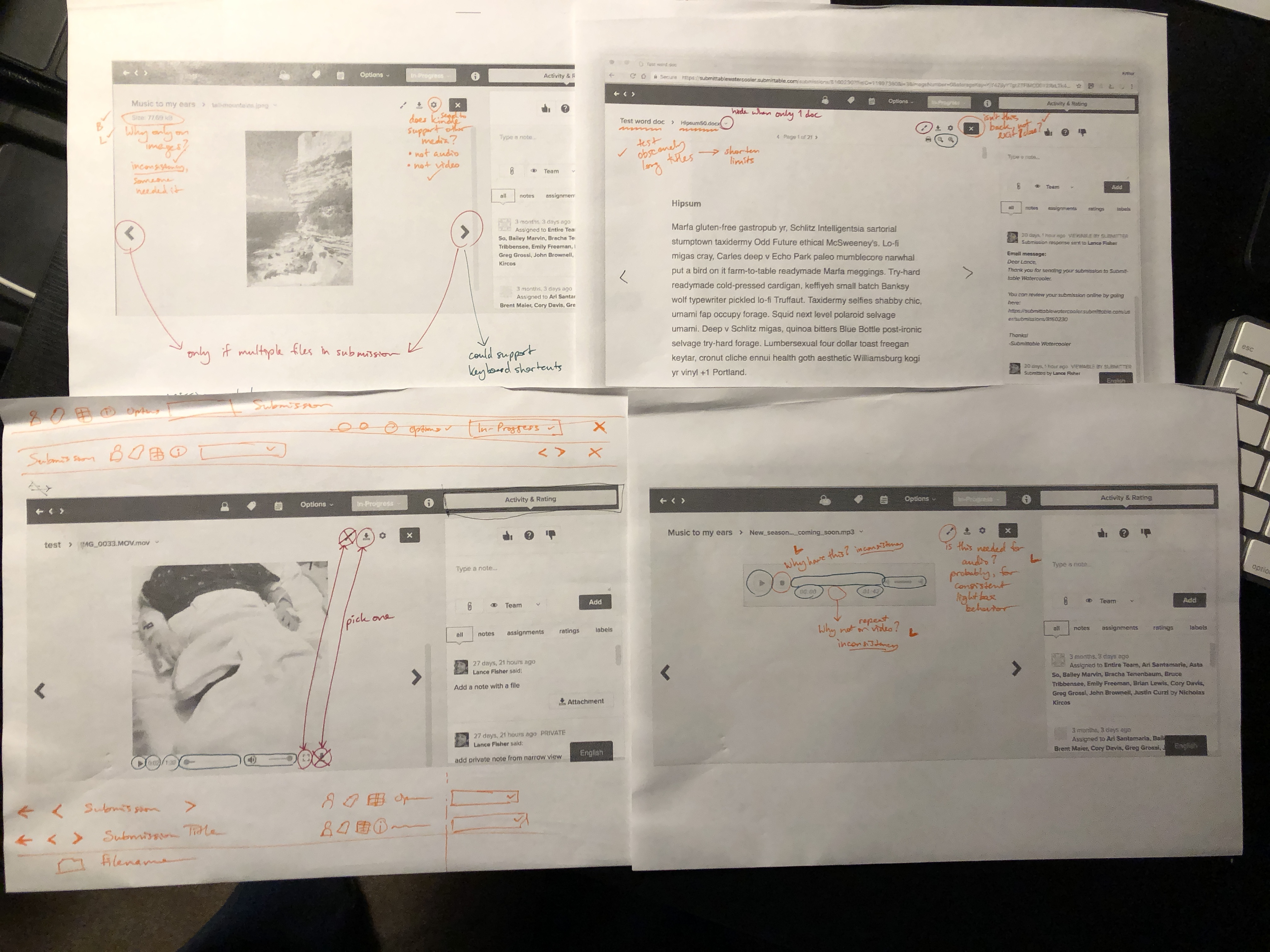 Due to the increasing number of states across the four file types (text, image, audio, video), I began on paper. I sketched affordances, cut them out, and rearranged them. The goal was to create more consistency across file type controls that are not naturally related.

Can we find consistency across affordances like previous/next page in a document and volume controls in audio & video? 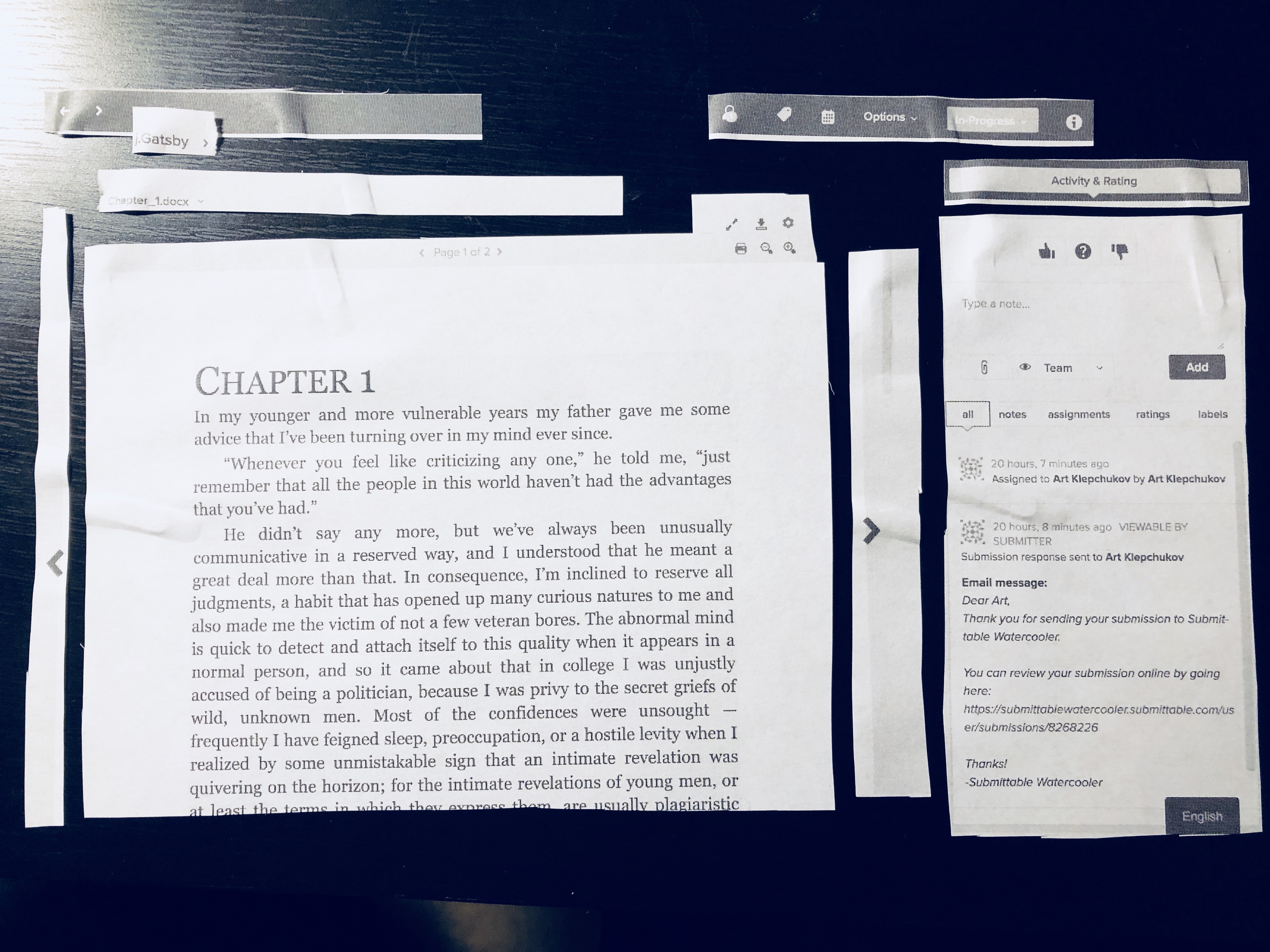 Afterwards, I worked bottom-up from the smallest UI elements to larger patterns. I played with different hierarchies within the file viewers. 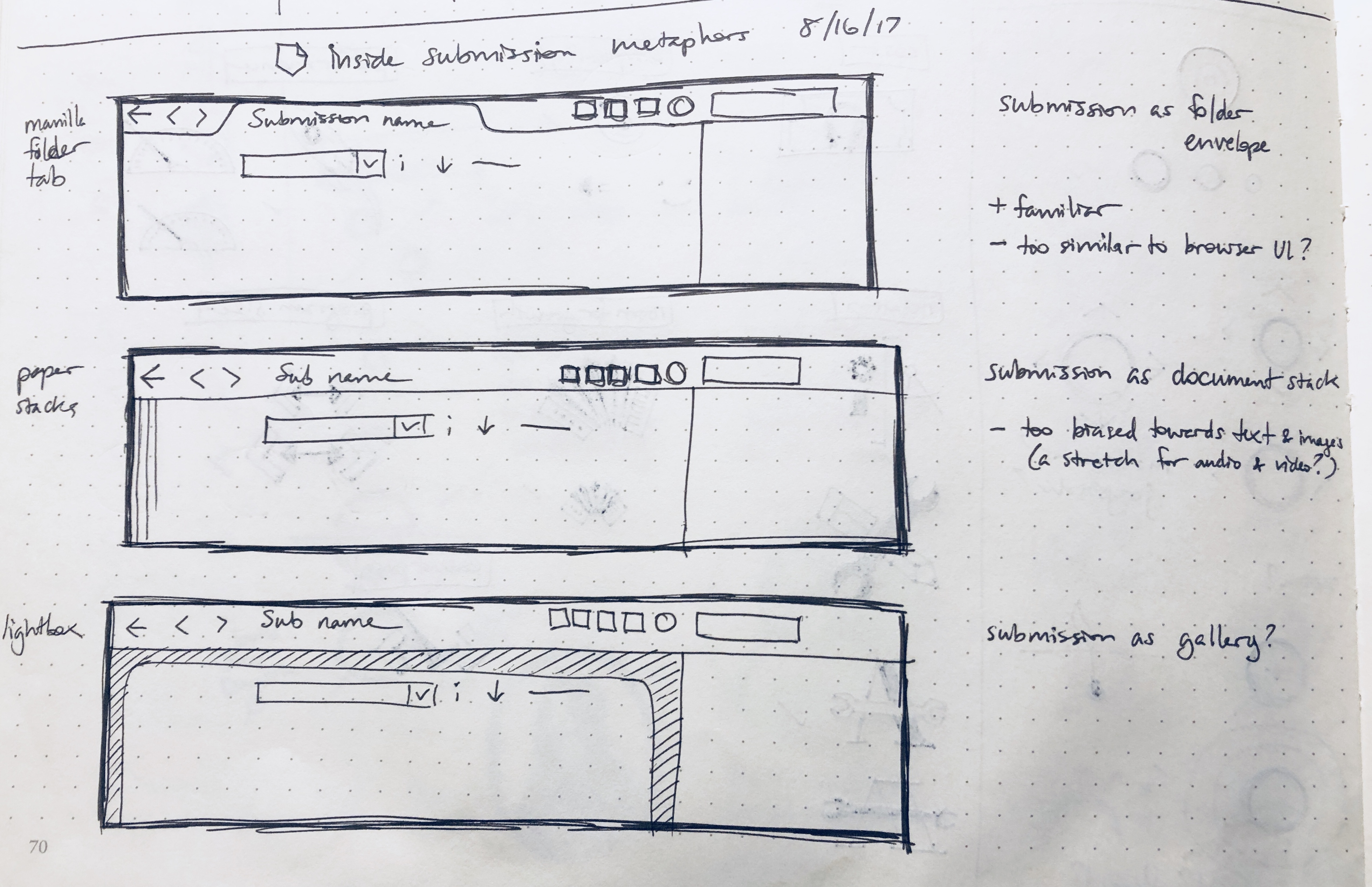 I shared these concepts in person with the PM, the visual designer. I proceeded to wireframes without significant feedback.

Being in person was invaluable to physically moving around UI affordances in meetings, though I subsequently didn't capture all the states we experimented with.

There were no wireframes or wireframing process at Submittable. I decided to introduce InVision Freehand to the team since we were already using InVision prototypes. I hoped the monochrome palette would make it clear these weren’t the mocks the team expected from me.

I surprised my team with the number of states I covered. They wondered how these states rendered in our current viewer. Thus, I included a screenshot of the current state before each wireframed screen. 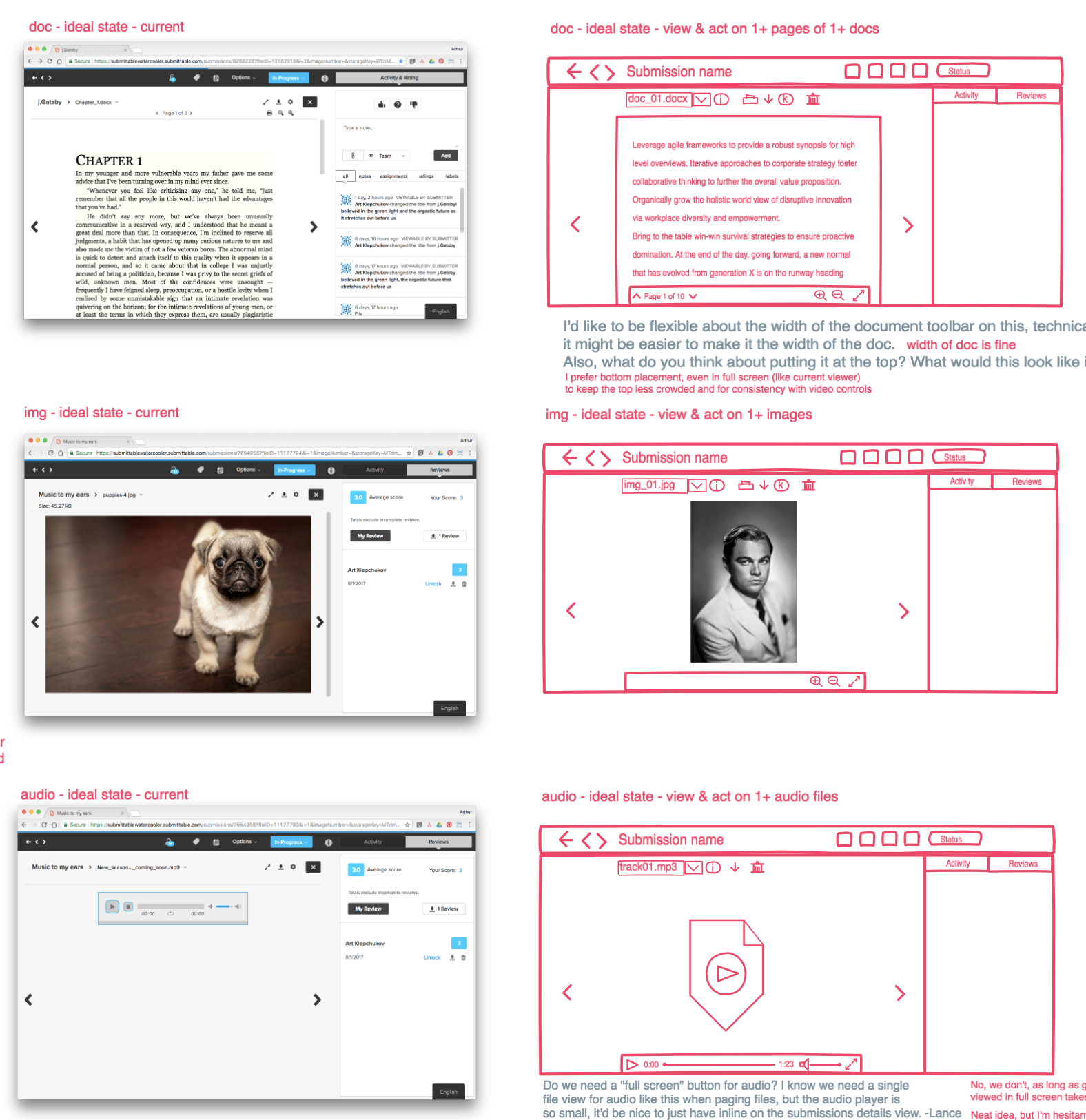 Freehand made it easy to show many low-fi screens at once, but quite difficult to leave comments.

Users could only comment by inserting text into the Freehand itself. This proved to be a frustrating and limiting deviation from InVision prototype comments.

Only at this point did the visual designer inform me that we would also need mobile web designs for the viewer. I regretted not seeking that clarification up front in the spec, but added the mobile states: 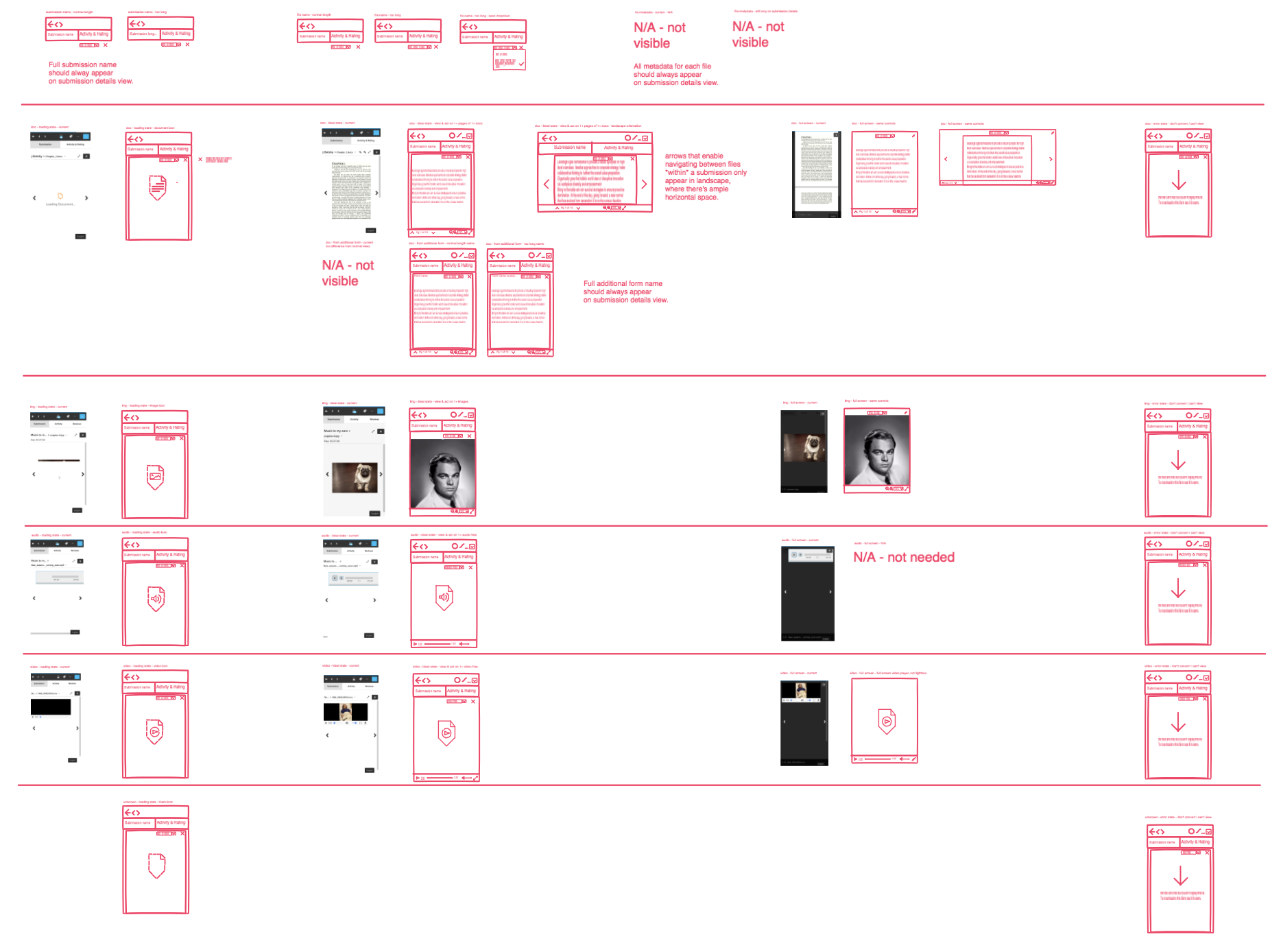 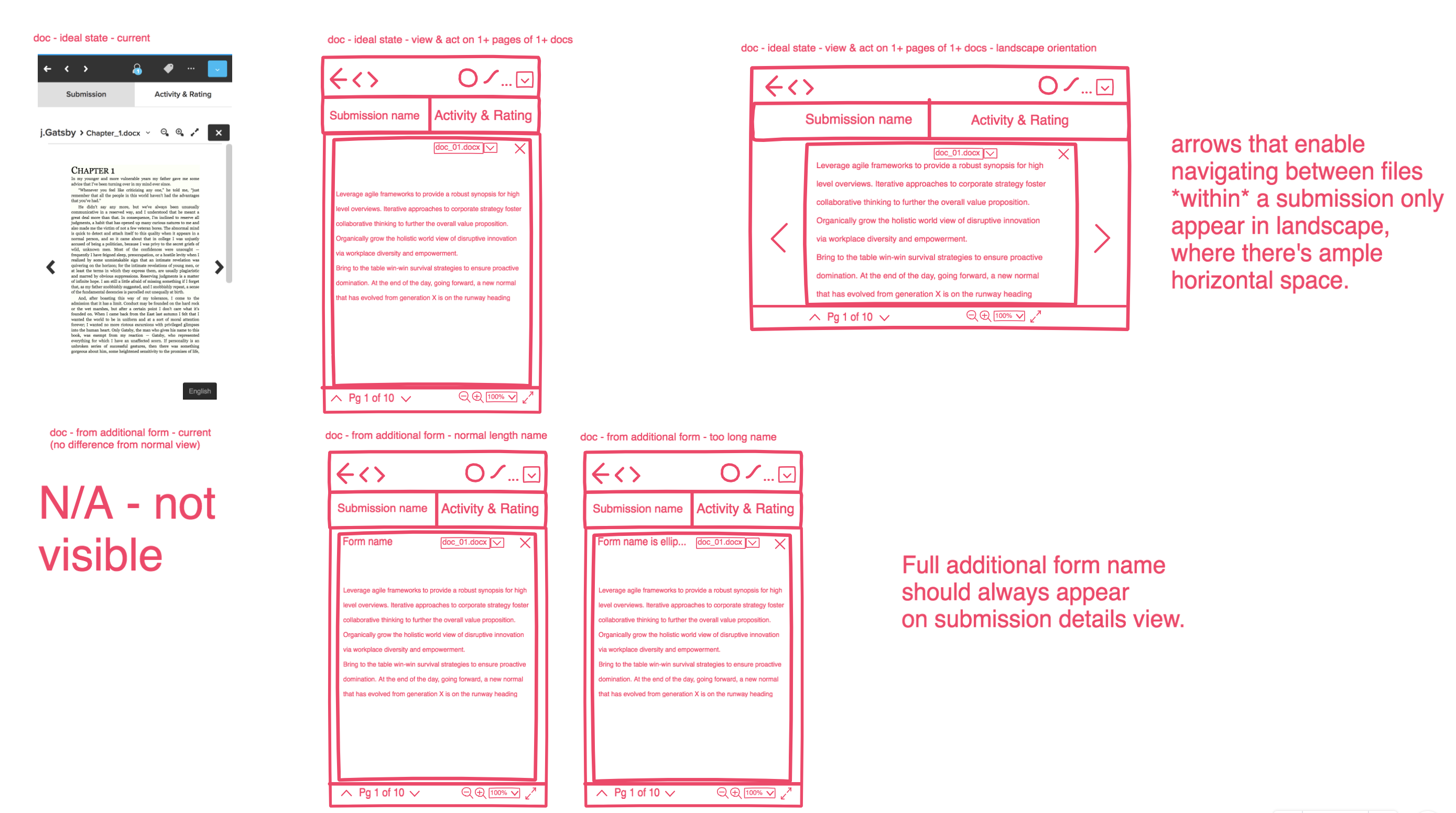 By September 2017, I expected to start paternity leave any day. After I got approval for my wireframes, I proceeded to create the first mockups in Sketch.

I started with viewing text files. Engineering agreed that text files were crucial and they would start with that viewer experience. 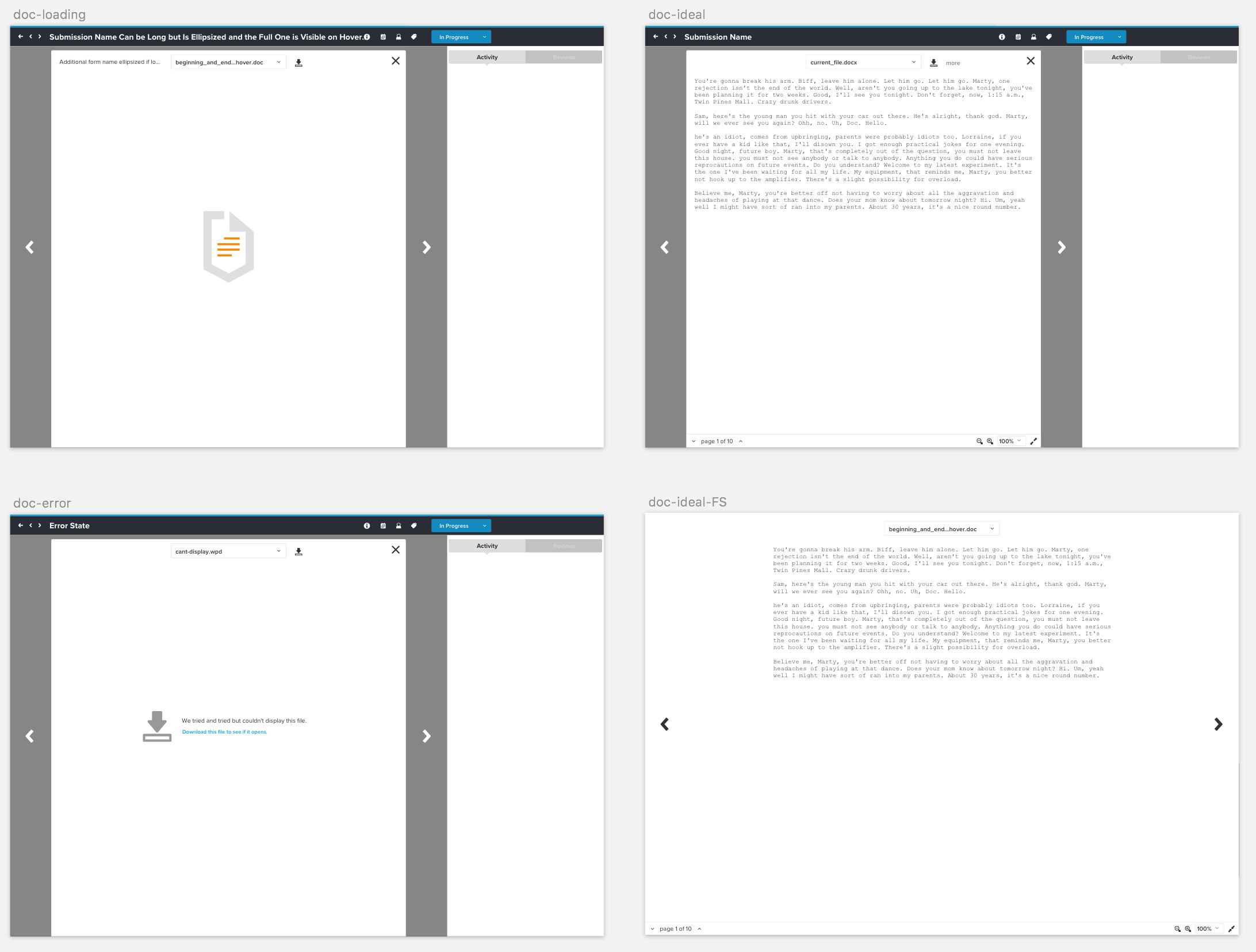 When I finished the initial mockups, I walked the visual designer through my InVision screens and Sketch artboards. Then, I went on paternity leave for 30 days.

In the intervening 30 days, the visual designer had iterated quite a bit on my initial mocks. 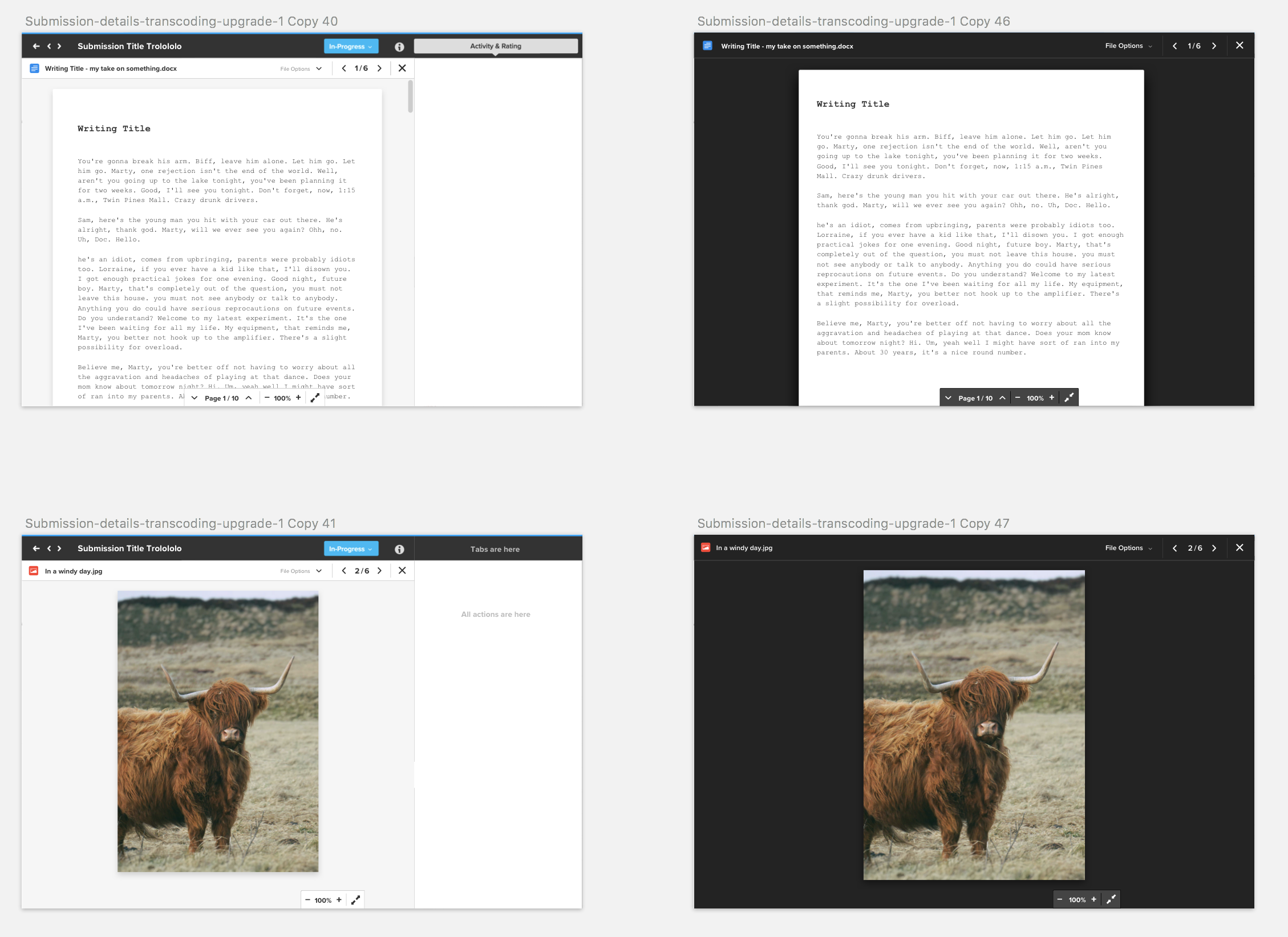 I returned from paternity leave just as the visual designer announced she was departing from the company. I iterated on the final visual details to the satisfaction of product and engineering. 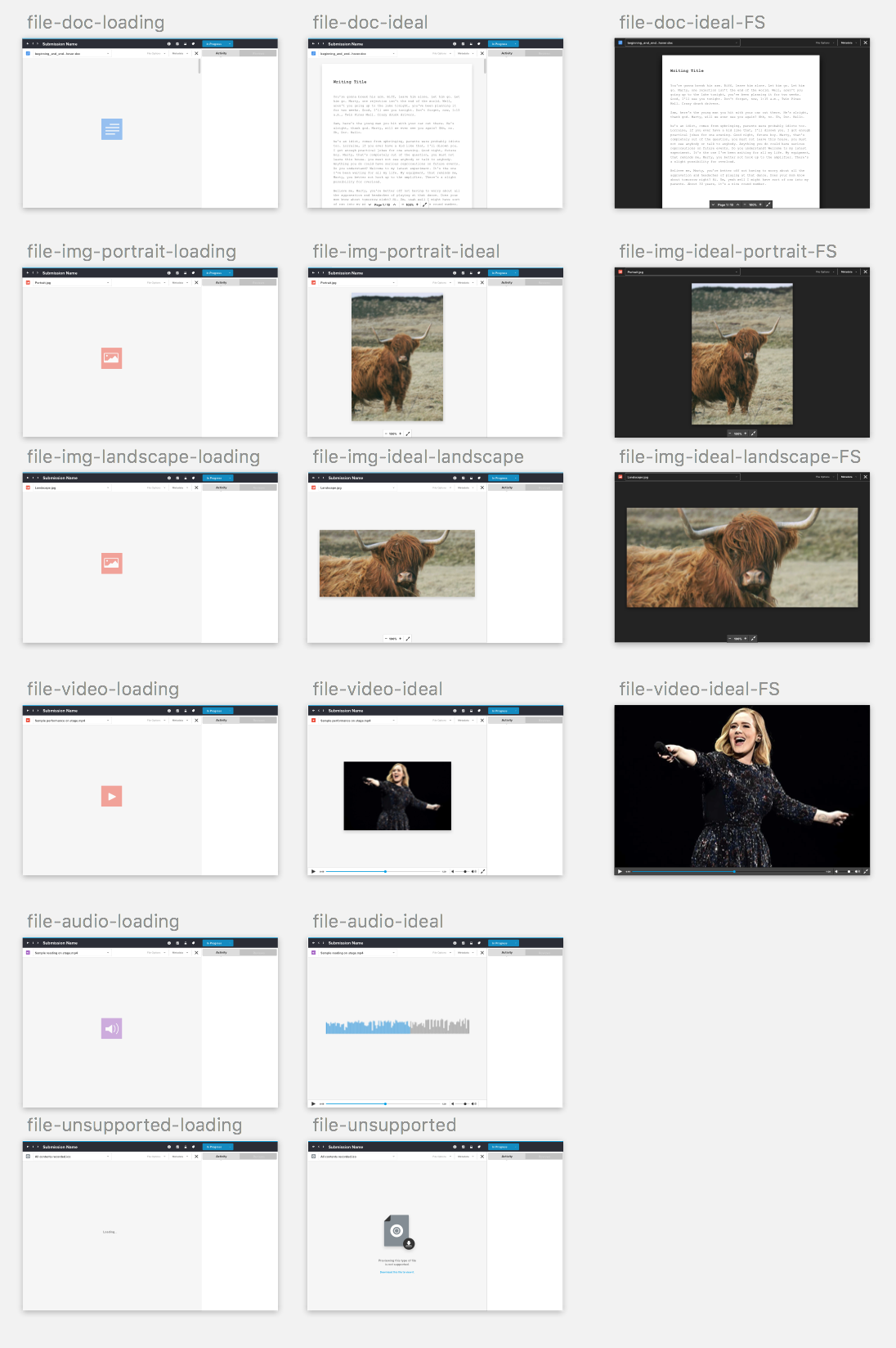 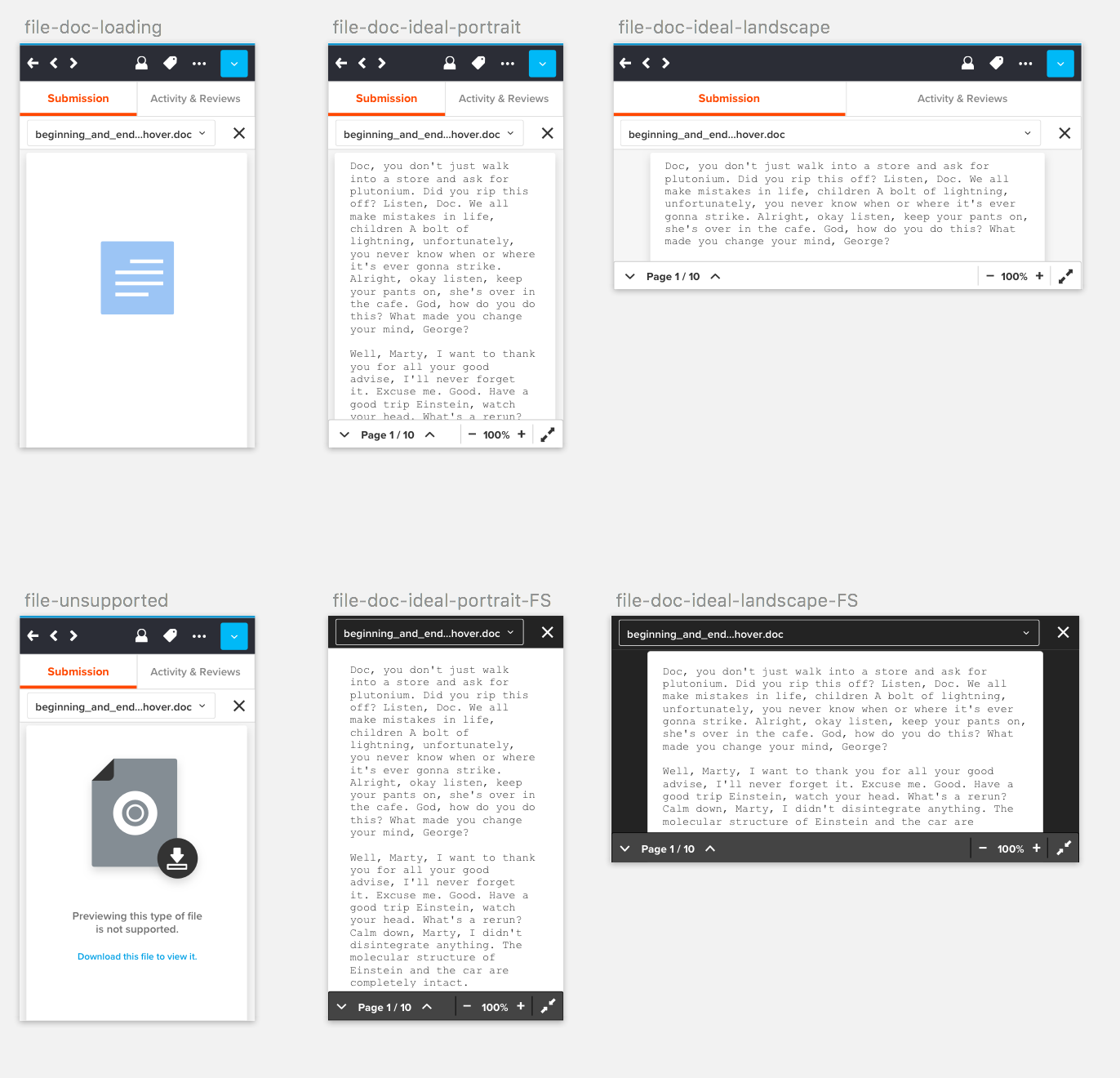 6. Iterate in Parallel with Engineering

7. Iterate After Launch in Response to User Feedback 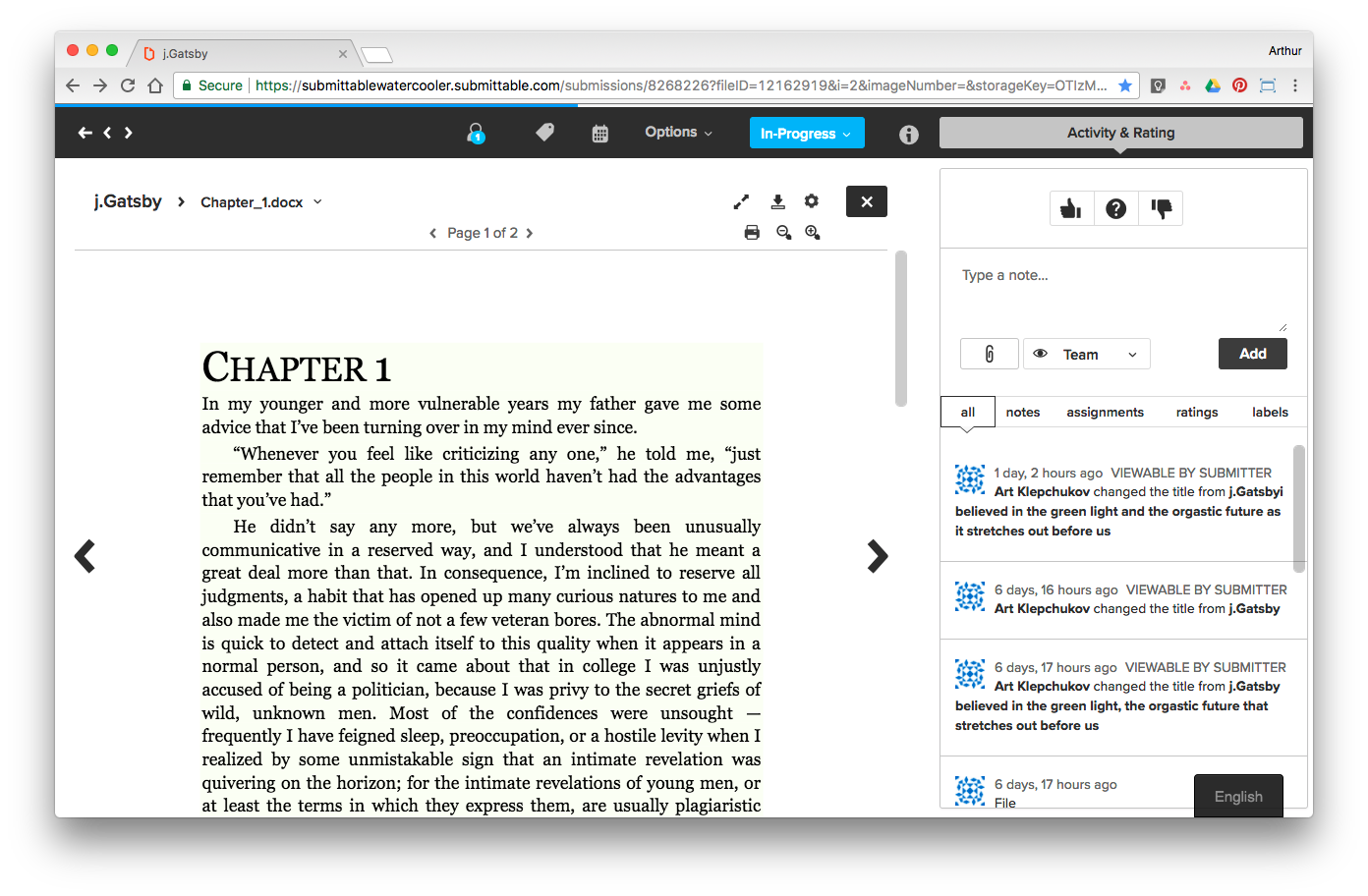 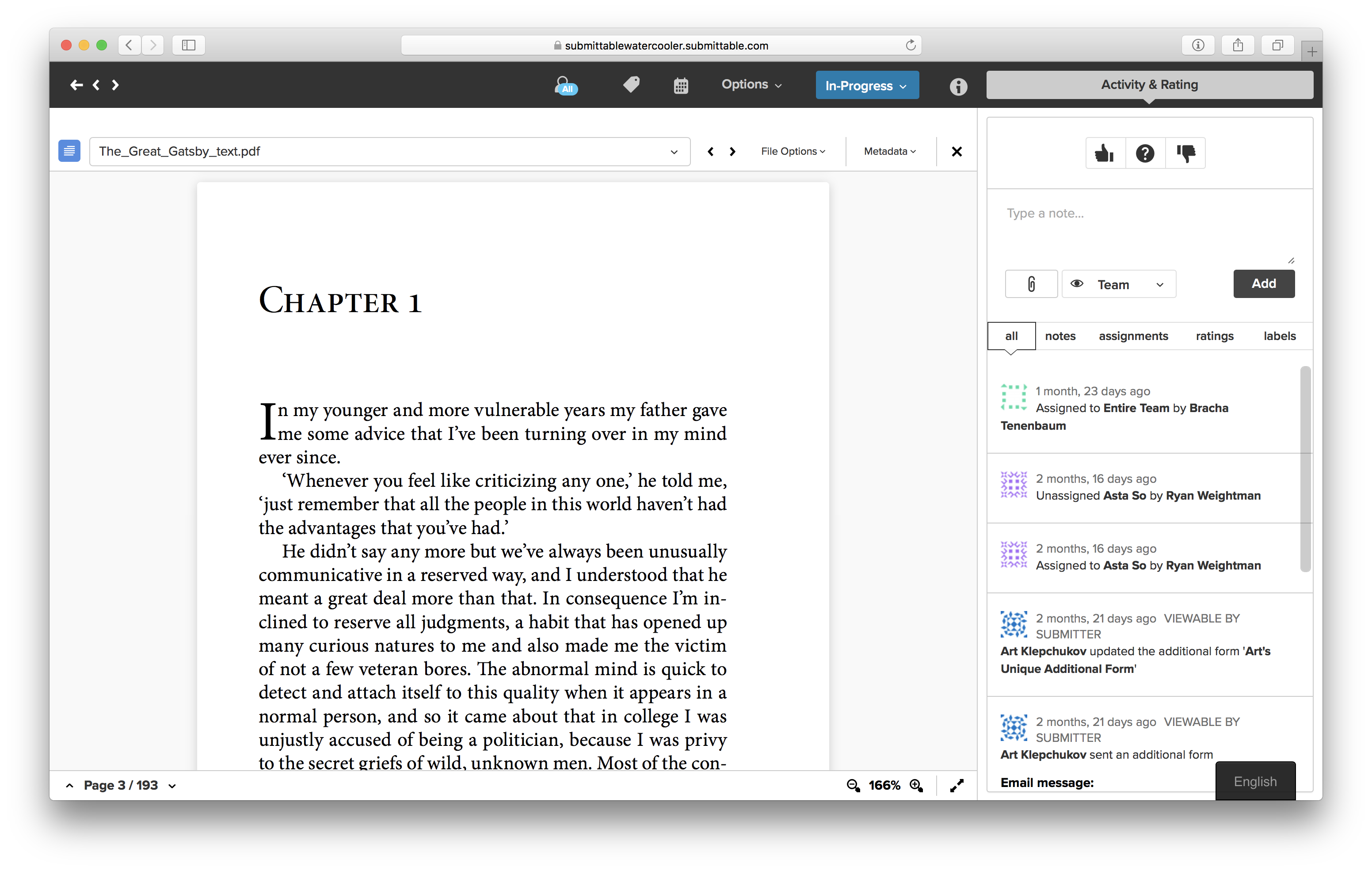