Coming back to a creative writing project requires remembering:

TheRightMargin can bridge writing sessions to help writers retain context and continue writing via a "note to self" prototype.

I hypothesized the following traits of an ideal prototype tester:

Recently, we began to offer users who wrote into support the ability to opt-in to a UX tester bank for future prototypes. We recruited 7 existing users of TheRightMargin from this UX tester bank within the first week. This was a speedy, welcome relief from casting a broad net to recruit any existing users out of the blue or appealing to local or online writing communities. Thus, we quickly overcame our last constraint.

I strongly disagreed with our 3rd design goal: Does not force the user to do work they wouldn’t normally do.

I felt we needed to successfully tap into existing behavior of writers leaving notes to their future selves, rather than encourage new behavior.

Our existing product had a corollary that I thought we could learn from—a writing timer. Timed writing exercises are not a new concept to our new product. I hypothesized that only those who already used timers in their writing used our timer.

We condensed 10 initial concepts to the following two prototypes.

Prototype A: when leaving a project, ask users what they want to accomplish when they come back

Prototype B: when returning to a project, ask users if the next milestone is still what they want to work on

5 of the 7 recruited users were available for an hour-long prototype test via screen sharing.

Rather than rely on static screens, which could not simulate writing, or taking a week (1/4 of our constrained time) to build the first prototype in our product, I tested a version of Prototypes A and B using the following script…

Based upon what we learned thus far, we revised our design goals. As we learned from timer users, appealing to new behavior was not a good place to start. Uniqueness was virtually guaranteed based on prototype responses and no longer worth emphasizing.

The biggest remaining problem from the initial prototype testing was when to present the note to self or context-preserving question. I quickly began to enumerate TheRightMargin workspace UI and settled on a bottom right placement that wouldn't distract from ongoing writing or conflict with potential commenting features. Here's my thought process on paper: 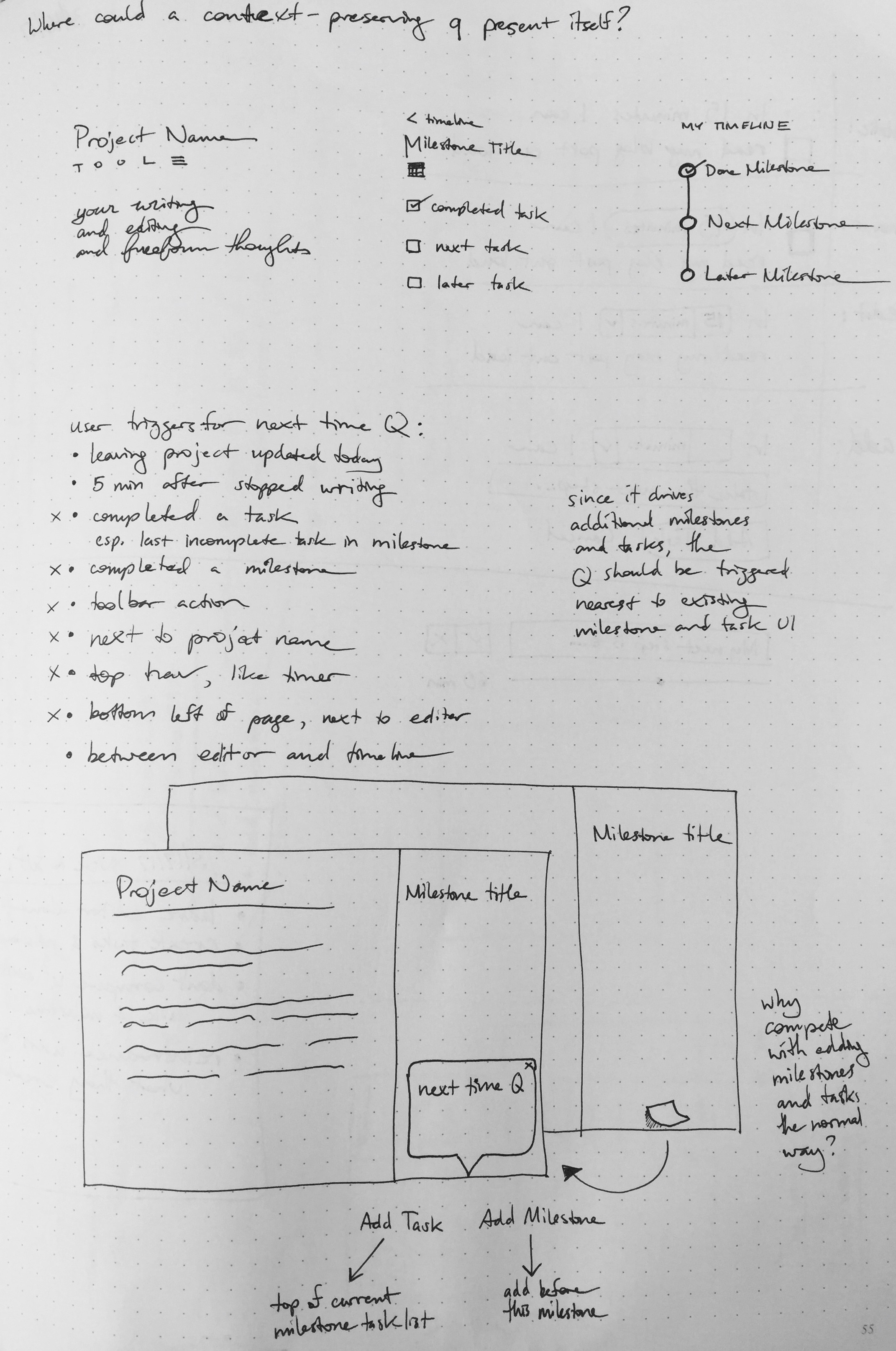 Then, I fleshed out the entry points and initial flows of this UI. The founder and I quickly scoped these down (i.e. the red ink) for a first version to build: 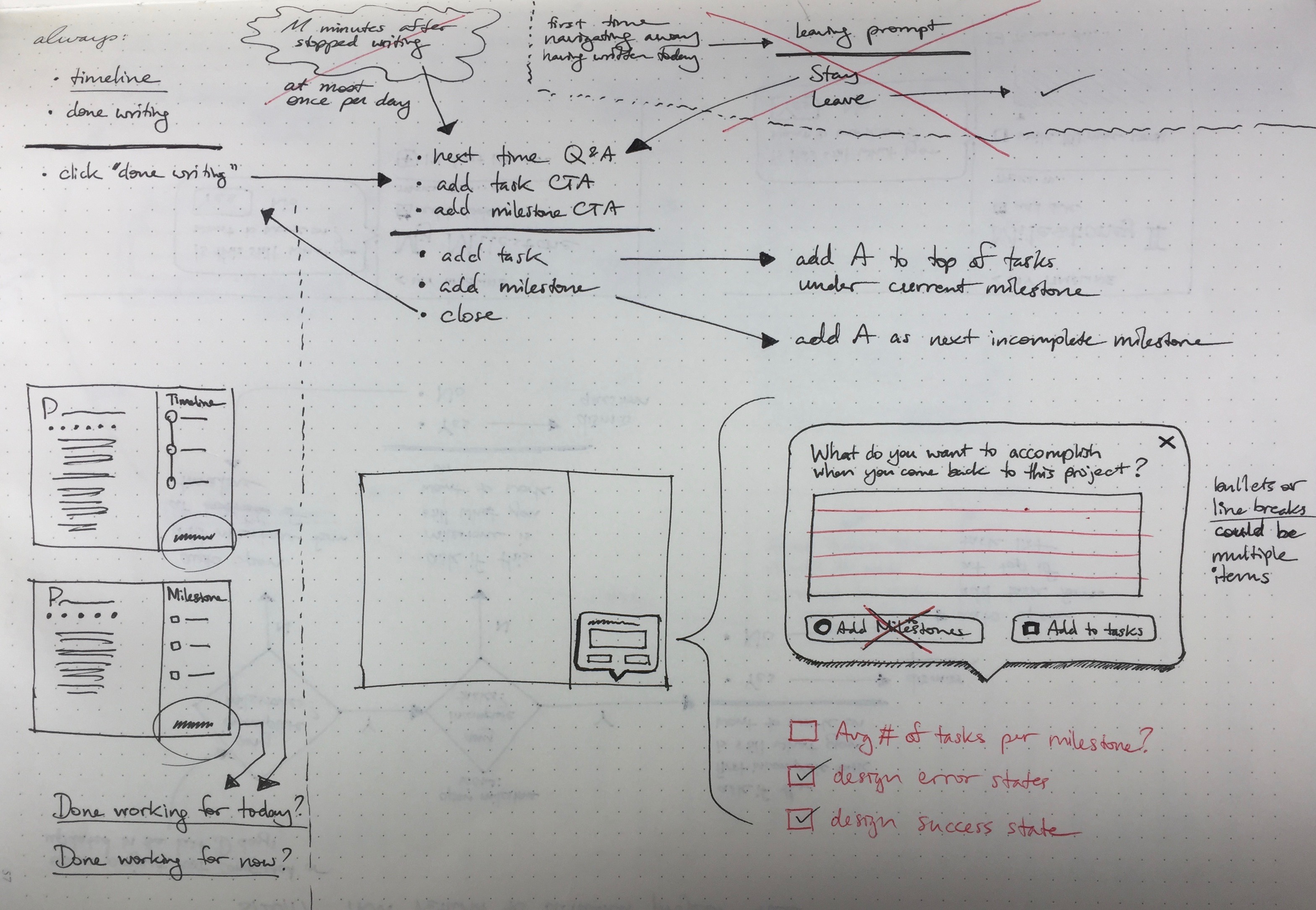 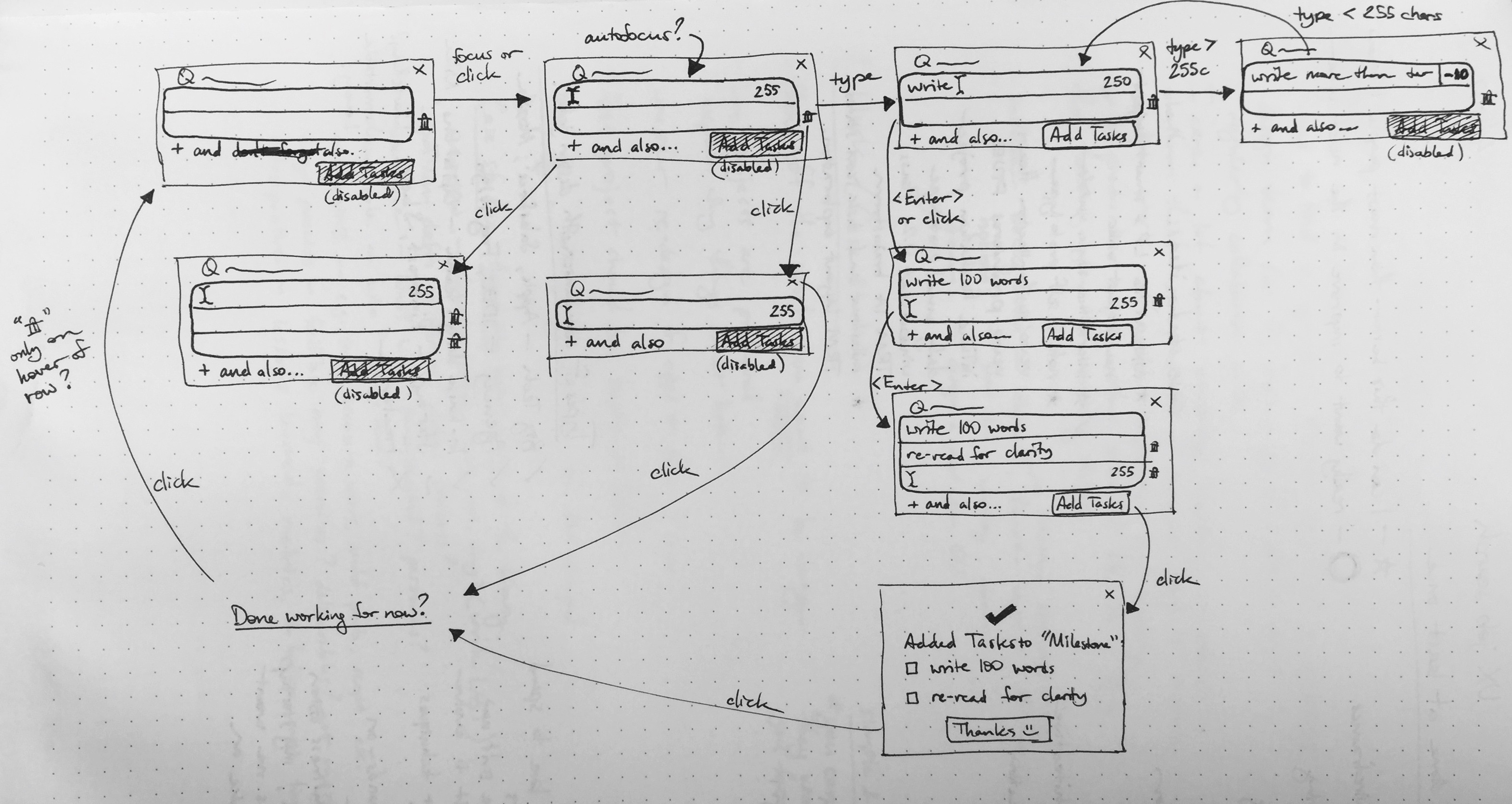 And even sketched Prototype B, which unfortunately wasn't implemented due to time constraints: 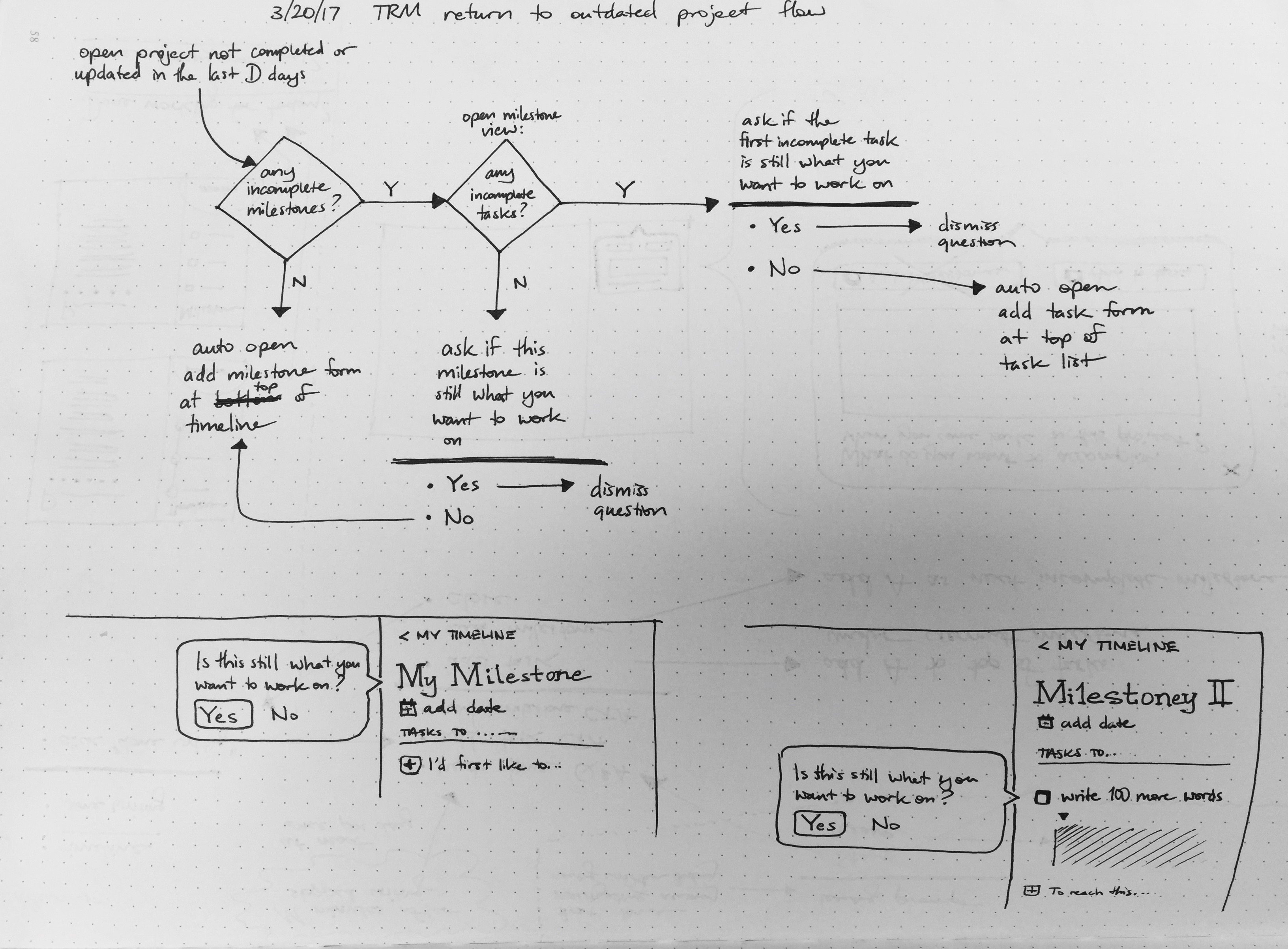 Here's what made it into production on TheRightMargin in March 2017.

The main affordance uses the language of "Done working for now?" to support both notes that relate directly to writing and other non-writing work (planning, brainstorming, research, outlining, etc.) that TheRightMargin currently supports.

The UI subtly draws attention to itself by pulsating the affordance at the bottom 30 minutes into a writing session:

The feature can also be manually triggered at any other time, in case 30 minutes doesn't work for the current writing session…

It provides basic error checking for task length and it saves the notes to self in the most visible place for next time (the top of the current milestone).

I instrumented the following metrics to measure the success of the first production version:

We hit our goals within our constraints, but it's too early to gauge success without collecting more production metrics and user feedback over a longer period of time.

The prototype tests were successful in discovering viable solutions to the pain of continuing to write across sessions. Implementation proved to be the biggest challenge as we had to pick a version we can build within the remaining time, rather than the ideal one. The 30 minute interval and general entry point to the UI still feel like untested hypotheses. Usability testing or even screen captures of longer sessions could begin to illuminate their effectiveness in the product.

Production feels incomplete without the Prototype B implementation to close the loop on how to rebuild context by drawing attention to the note(s) to self from the previous session, after a reasonable interval of time.